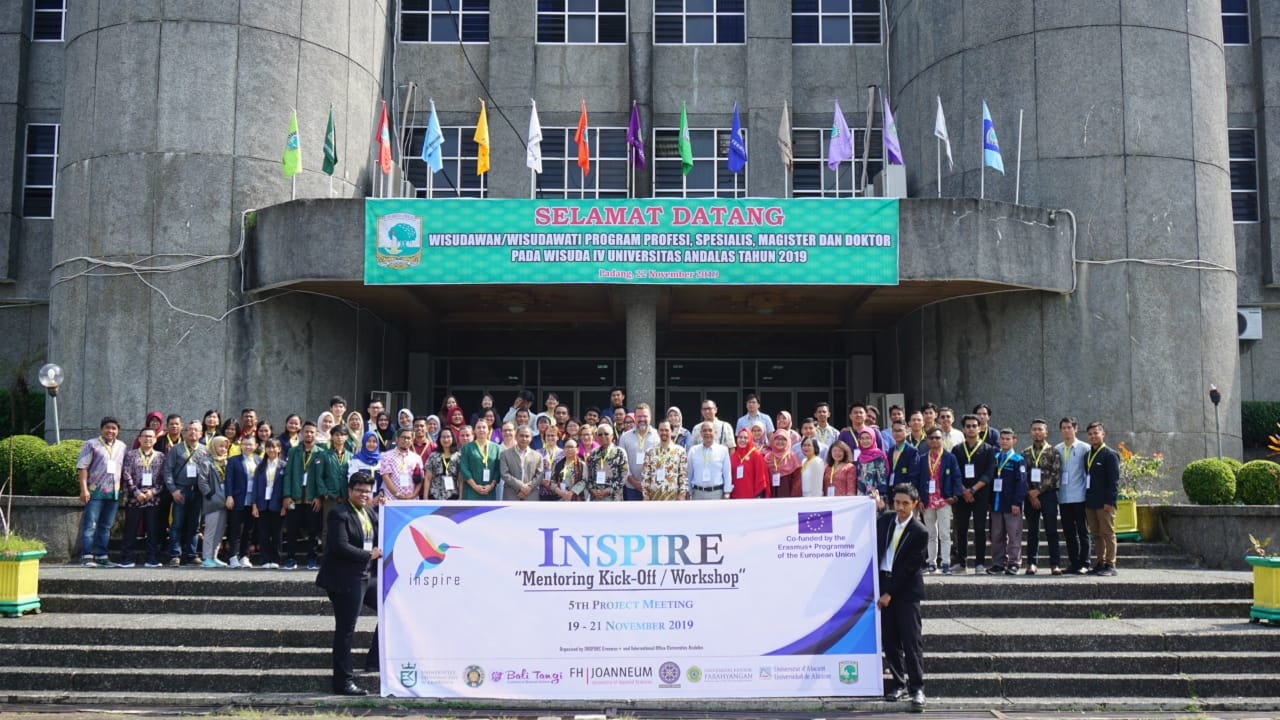 Andalas University was the Host of the Erasmus + INSPIRE Project on the 19th -21st of November 2019 and organized the Mentoring Kick Off & Workshop.

Comments are off for this post
Clemens Rant
News

This activity was attended by 93 participants from within and outside the country, consisting of lecturers and students from 3 foreign partner universities (FH Joanneum University of Applied Sciences, Austria, University of Alicante, Spain and Krakow University of Economics, Poland) and 4 universities domestic partners (USU, Unpar, Udayana, Bali Tangi, Unpar and Unand as the host). This event was held for 3 days from 19-21 November 2019 with the support of representative meeting room facilities in the Postgraduate Seminar Room of the Faculty of Economics as well as the support of event organizations from the Field Office 4 and KUI. The event was opened by the Rector of Andalas University, who was represented on the occasion by the Vice Rector 4 in Planning, Development and Cooperation, Dr. Ir. Endry Martius, M.Sc. The occasion was also attended by Head of the International Affairs Office of Andalas University, Dr. Vonny Indah Mutiara.

The 3-day agenda of activities was guided by Dr. Ma’ruf, as Project Manager of INSPIRE of Andalas University, Ms. Lisa Mahajan as INSPIRE’s Project Coordinator and Prof. Agnieszka Zur as Person in Charge of Mentoring Program. On the first day, the agenda was focused on mentoring workshops attended by 56 students from 4 partner universities in Indonesia, and accompanied by 8 mentors (business and professional) and internal mentors from each university. These students are the winners of the Social Business Plan Competition which consists of 25 groups where each group has passed the selection and is entitled to mentoring facilities for 1 year. This mentoring program will also be supported by the Co-Working Space facility.

On the second day, after completing the workshop and mentoring kick-off, the Opening Ceremony of Co-Working Space was held. It is a facility dedicated to the mentoring program for at least 1 year ahead. After 1 year this co-working space can be used further for all students who are interested in developing and building a social business. The co-working space is located on the 5th Floor of the Rectorate and was held with a simple ceremony, witnessed by all participants. At the Opening Ceremony, ribbon cutting was done by the Vice Chancellor 4 of Andalas University and Ms. Lisa Mahajan as INSPIRE’s Project Coordinator. It is also symbolically marked the opening of the same 3 co-working spaces at other partner universities at USU, Unpar and Udayana. The four co-working spaces will also be equipped with equipment funded by the INSPIRE project so that they can support the social business development process that will be conducted by students.

The second day’s agenda ended with sharing about social business from West Sumatra delivered by Mr. Roki Afriandi, Director of CV. RP’s Alam Lestari Farm. This company is one of the businesses that has been running for 4 years with the main product being organic fertilizer produced from the main raw material of organic waste from the market and from households. In its operation, the company has had an impact on reducing the problems of waste, air pollution, water pollution and forest fires.

Day 3 of the INSPIRE series of activities was filled with Project Meetings, which were held twice a year during the project. In this project meeting report on the various activities that have been carried out, evaluation and plans for the implementation of future activities until the end of the project in 2020. The next project meeting will be held at Parahyangan University in September 2020. On this occasion, there be presented two best business plans from each partner university in Indonesia.